As a railway engineering professional, Dr. Lawson Mbugguss knows that construction of conventional routes is extremely expensive, hard or infeasible at all in the regions and areas where difficult terrain or water barriers do not allow for regular transportation links. Thus, the construction of uSky complexes in mountainous areas or jungles, rainforests or deserts can be much cheaper compared to any other available transport means.

The British expert was told about uSky Transport and Infrastructure Technology, and he witnessed an innovative and fully certified vehicle – the tropical uCar. 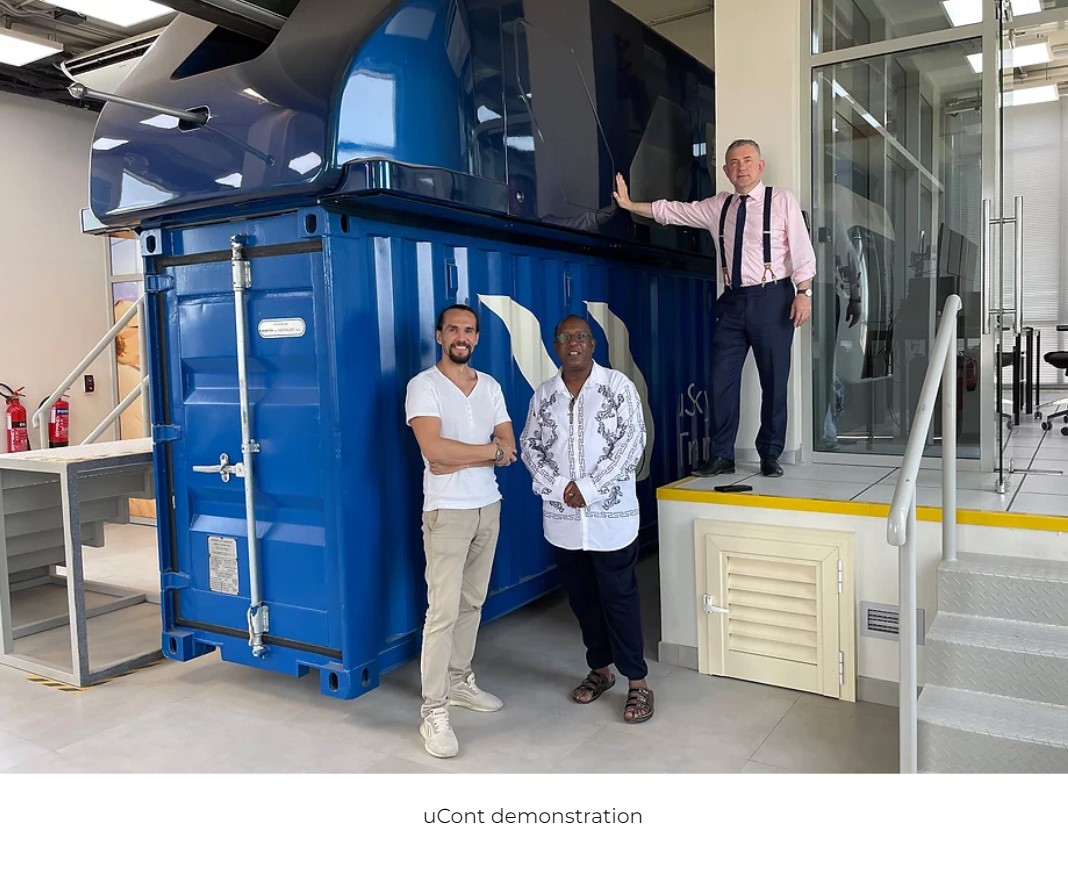 uCar is a comfortable electric vehicle with 4 seats. It is driven with a traction power from a contact network or on-board energy storage unit, and used for riding on urban and suburban routes. The design of the uCar makes it possible to arrange its modules into a single train through a rigid coupling. The number of train units and their capacity depends on the assumed ridership. The customized uCar in tropical version is designed for regions with arid climate and upper operation temperature limit up to +55°C.

In the control room with a hardware-and-software complex, the British expert learned the details about the production and operation of uSky passenger and cargo vehicles.

At the service station, the guest was shown the suspended container carrier uCont.

uSky freight complexes can transport cargo up to 100 million tons per year and have several advantages over the conventional cargo transportation means:

The guest learned about the efficiency, environmental friendliness, and safety of high-speed steel-wheeled electric vehicle uFlash. With an integrated multimedia system and a capacity of 6 paх, and capable of traveling on uSky overpasses at 500 km/h, it features aerodynamic characteristics surpassing those of such a supercar as Bugatti Veyron.

Being an expert in his field, Dr. Lawson Mbugguss is actively interacting with the African Union involved in the development of railway infrastructure on the African continent covering over 58,000 km to link the African major cities and cross Africa from North to South and East to West. At this stage, a 12,000 km route is under consideration, which assumingly should be implemented before 2026. Within this infrastructure, the section of the railway in Nigeria running through Calabar, the capital of Cross River State and a port city of importance for freight traffic flows is of greatest interest. Dr. Lawson Mbugguss is optimistic that uSky Transport & Infrastructure Technology could be an ideal alternative solution for the 80–100 km track.

Dr. Lawson Mbugguss was presented with the book of Dr. Anatoli Unitsky “String Transport Systems: on Earth and in Space” revealing the theory, prospects, and main results of research on high-speed ground transport and non-rocket geospace transport systems – the General Planetary Vehicle.

From his professional heights, Dr. Lawson Mbugguss highly appreciated the capabilities of uSky Transport & Infrastructure Technology and expressed his desire to make every effort so that the idea of implementing uSky Transport projects on the African continent captured him would be implemented as soon as possible.