The doors of uSky Test & Certification Centre are always open for guests from all over the world. The most frequent guests can for a good reason be considered representatives of Brazil: Mr. Marcos Pontes – the first Brazilian astronaut and currently the Minister of Science, Technology and Innovation in the Brazilian government, delegates as a part of International Transport Mission in the UAE and representatives of the Brazilian business community have all already visited uSky Centre formerly.

This time, mayors of 15 Brazilian cities along with directors and top managers of construction and consulting companies in Brazil showed their interest in uSky Transport & Infrastructure Technology:

Delegates got familiar with the unique features of uSky Transport & Infrastructure Technology, learned the details of the production and operation of passenger and cargo transport with an automated control system and artificial intelligence.

Attending the control room with an in-house developed world-class coherent infrastructure of software and hardware that is optimally coordinated and serves for robust and powerful operations of full-electric vehicles uPods, the visitors became personally certain that innovative uSky transport is safe and reliable, including the certified tropical uCar, which they took a ride in.

The delegates were much told about the security peculiarities, including towing and evacuation systems, integrated artificial intelligence system and vehicle positioning on the track structure. 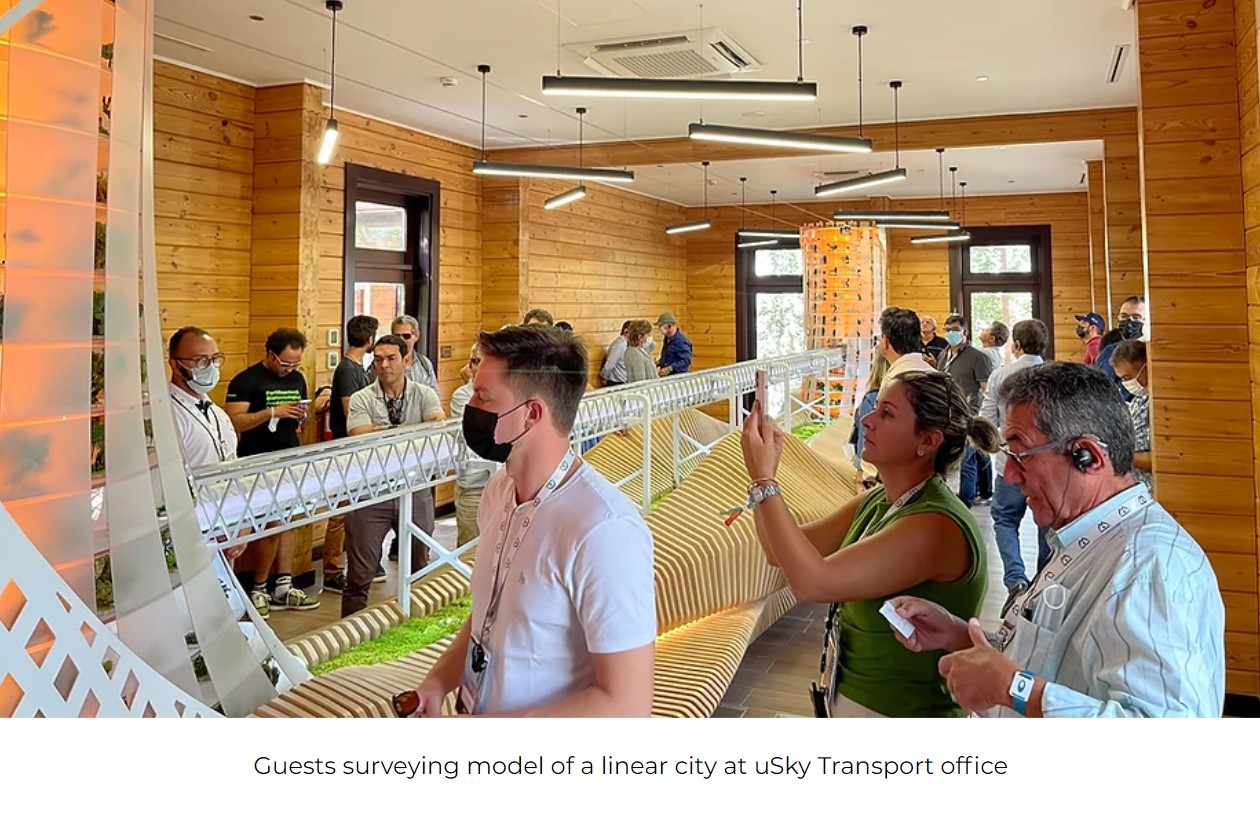 uSky Transport & Infrastructure Technology control system, which is automated and equipped with subsystems for machine vision, positioning, routing tasks, recognizing threats and signaling within the traffic network of vehicles exchanging data with each other.

The guests wondered how electric vehicles uPods derailment could be prevented. It was interesting hearing about all uSky EV’s to be equipped additionally with side wheels apart from rail wheels, thus allowing for anti-derailment system.

Along with the competitive price, the following advantages of uSky complexes stand out most clearly:

The guests learned about the efficiency, environmental friendliness and safety of high-speed electric vehicle uFlash with steel wheels.

A high-speed uFlash with an integrated multimedia system and a capacity of 6 paх capable of travelling on uSky overpasses at the speed of up to 500 km/h and featuring extraordinary aerodynamic characteristics, for instance, exceeding those of Bugatti Veyron supercar by 7 times.

It is thanks to such unique aerodynamic characteristics that the high energy efficiency of uFlash is ensured, since at high speeds more than 90% of the vehicle’s drive power is spent on overcoming aerodynamic resistance.

At uSky Transport office, the guests were shown the operating model of a linear city with five types of uSky tracks.

During the tour, the delegates Mr. Silvio Barros, civil engineer consultant in Sustainability and Collaborative Governance, ex-mayor of Maringá/PR and Mr. Rodrigo Salvadori, a businessman from Campo Mourão, revealed about their acquaintance with uSky Technology and its founder Dr. Anatoli Unitsky in Minsk in 2018. And over the course of years, Mr. Silvio Barros and Mr. Rodrigo Salvadori have been following the progressive development of uSky Transport in the UAE with great interest and pleasure.

During the meeting, negotiations were held with Mr. Alan Guedes, Mayor of Dourados/MS for the project that could link the municipalities of Dourados and Maracaju with the ports in Paraná to the port of Paranaguá.

Mr. Alan Guedes emphasized that the delegation was on a mission to present Dorados‘ production facilities: “It was a great pleasure to come here and find out that uSky Transport knows about our industrial vocation and our potential for future projects. And they know very well the route of the railway, the bio-ocean route and the production facilities of Dourados and the southern region.”

It was a special pleasure to present the guests with books by Dr. Anatoli Unitsky, the autobiography “The Engineer” about the development of the original concept of uSky transport.

The delegates very rather thankful to the representatives of uSky Transport for the warm welcome and interesting information about the latest mode of transport and expressed their hope for fruitful cooperation in the field of joint development of transport communication in various cities of Brazil. In turn, uSky Transport is ready to expand its business in Latin America by implementing its innovative and highly efficient projects.